I mean, who wouldn’t enjoy the compliment of a ‘well done’, or ‘I’m so proud of you’?

Millions of people – that’s who!

It can be really difficult to hear praise from someone – especially if it directly contradicts and challenges your self-worth and the perception you have of your achievements.

Hearing “ooh, you’ve done SO well” can trigger strong feelings of embarrassment, and shame, even guilt.

For many people, the immediate thoughts are that someone’s ‘just being kind’, or even that they’re teasing, because praise like this is just so difficult to comprehend.

Never mind believing it as truth.

Struggling to accept a compliment can be a side effect of low confidence and a lack of self belief.  But I’m not suggesting for one minute that everyone who finds it difficult to accept compliments, or gets tongue-tied trying to find an appropriate response has low self-esteem.

For example, you might be someone who feels really confident in your appearance, and truly enjoys a compliment paid about the way you look.  But on the other hand, because you feel like you still have so much to learn in your business before you’re ‘an expert’, you become very uncomfortable hearing that you’re doing fantastically well and inspiring so many people.  (I’ll be releasing a blog in the coming weeks about this very thing, so keep your eyes peeled for that!)

The reverse can also be true of course.  And when you hold insecurities about yourself – in one or every area – it can leave you questioning the lovely thing someone says about you when the reality is that they’re doing nothing more than being truthful about their perception of you.

They’re telling you the good they see in you, that you find so much easier to recognise in them.

Accepting compliments is a skill

"I hate getting compliments"

As I was preparing for this blog, I thought back to conversations with friends, and with clients about compliments, and along with repetition of that phrase, two themes stood out:

Not knowing what to say when someone pays a compliment.

If you grew up in a generation where you ‘mustn’t give yourself praise because it makes you arrogant’, the chances are that when someone was proud of you, they expressed it out of earshot to avoid your ‘head getting too big’.

It’s little wonder why it’s so difficult to know what an appropriate reply is when you’ve never really learned that it’s perfectly ok to simply say a gracious “thank you”, or “that’s very kind of you”, or “I appreciate the compliment!”

It’s very easy to automatically argue someone’s expressed positive view of you when it doesn’t match your own – and how many times have you gone even further than a brief dismissal, offering up a full on thesis instead with all the reasons why that person is ‘wrong’.  The risk with that is leaving someone feeling rejected, or belittled for showing admiration of you.

‘Thank you’ goes a long way, and as well as allowing space for you to soak up and process such a positive comment, it leaves the person gifting you this verbal ray of sunshine feeling great too, for having brightened your day.

Pressure of a heightened expectation.

If someone tells you how impressive you are, fear of letting them down, or of not living up to this (often non-existent) high level of expectation on you, can feel like immense pressure – especially if you don’t see those things in yourself.

In many cases, this rising fear of failure can be paralysing, and self-esteem can decline as you start (or continue) to feel ‘not good enough’ or ‘not worthy’.

It’s vital to remember that everyone has different perspectives on everything and everyone in the world.  Someone has offered you their opinion, and just because it doesn’t match your own, take a moment to consider it – just as you would if someone offered you a negative opinion.

Recognising compliments as someone truthfully expressing their own opinion of you, while acknowledging and accepting that it’s different to your own is a great start to getting comfortable with hearing them.

Accept both compliments AND criticism. It takes both sun and rain for a flower to grow. 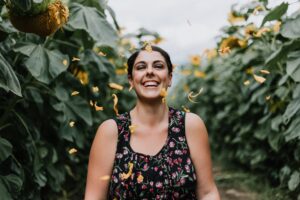 It’s not arrogance to acknowledge and appreciate yourself

Please PLEASE forget the concept of arrogance becoming a risk for you if you appreciate or celebrate yourself and your achievements.

The mere fact that you’ve found your way to reading this blog should be proof enough for you that you are light years away from that becoming likely!

Next time someone says something lovely about you, or about something you’ve done, offer a simple ‘thank you’, and just take note of their reaction while you process what’s been said.

It’s not uncommon to have no idea where such a comment might’ve come from.

This person has made a point of telling you something so warm and positive at the risk of being brushed aside, so imagine how happy they’ll be to explain some context behind the compliment.

It’ll help you believe there’s no mocking or teasing going on when you’re reflecting on the moment later.

Becoming comfortable with compliments is a happy side effect in feeling empowered and increasing your self-esteem.

If this has resonated, and you’re feeling like low self-esteem could be the root of why you find it so difficult to deal with compliments, now is the perfect time to get in touch!

So if want to increase your self-belief, improve your resilience, and move forwards feeling confident and empowered, click the link and start your journey on my Rise and Thrive 12-week coaching programme.